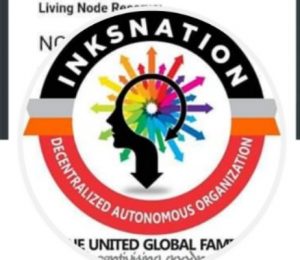 InksNation is a Financial Empowerment Scheme that exists as a Decentralized Autonomous Organization(DAO). InksNation was founded by Amos Sewanu Omotade-Sparks, Having their headquarters in Nigeria at 19 Posukoh Quarters off Joseph Dosu Way, Badagry, Lagos State. Inksnation states that its project can eradicate poverty in any country in less than 9 months. It intends to achieve this with its own blockchain called InksLedger(formerly iBLedger).

As mentioned earlier, InksLedger does not function as conventional blockchain technology do e.g Bitcoin, Litecoin, etc.

Infact, it is not even built upon or modeled after any pre-existing blockchain.

Rather, InksLedger is to function as a first of its kind charitable blockchain that will be backed by human assets.

This means that every human being that signs up with Inksnation becomes a living node on its blockchain.

As stated on its platform, it claims its project is not time-oriented rather target-oriented.

That it is centered around making human asset investment the biggest and the best before 2025.

InksLedger proposes to use what it calls the Proof of Love consensus mechanism and Inkrestation (one united global family system of governance).

For the Proof of Love or Collective Mass Agreement (CMA), 180 sovereign currencies are represented as 180 LivingNodes(LNs).

Most importantly, it claims to seek ways to make AI work for humans perpetually.

It is still unclear how this will work or how transactions will be confirmed by these living nodes.

Just as every blockchain has its token, InkLedger has its own coin – the Pinkoin.

Follow me to the next section to learn more about it.

It being a native coin simply means that it will be used to make whatever payment that is to be made on InksLedger.

This is the same as in the case of Ethereum where Ether is used and that of NEO where Gas is used.

According to the team at Inksnation, this native reserve coin will pay everyone on earth (including babies born every day) salary for life.

It is proposing a minimum of 4,000NGN daily and 120,000NGN will be paid monthly for life as UCBI (Universal Child Basic Income).

The coin is set to launch on 12th August 2020 thus bringing its crowdsale to an end.

No exchange has indicated support for Pinkoin yet. Thus, PKN can only be acquired from the Inksnation site.

also review KudaBank Review: All You Need to Know About Kuda Bank (2020)

How to Acquire Pinkoin – The Membership Registration Plans

Before you can talk about getting Pinkoin, you will have to sign up with Inksnation.

When signing up on Inksnation, you are to select a suitable membership plan for yourself.

The available membership plans include:

For all the plans:

Find other details about the plans in the table below.

When you have chosen a plan, you will go ahead and fill the Sign-Up form.

After filling the form, you will then contact the person that introduced you to Inksnation and pay the correct amount.

If no one introduced you, account details to make payment will be provided for you.

When payment has been made, send the proof of payment and your username to the person(or to the provided WhatsApp number).

The person will then activate your account using his/her Pinkard.

Pinkard is a QR debit card that is issued to users on the platform. It is used to register new members.

When your account is activated, you will go ahead and set it up. You can even print your own Pinkard.

Based on the User Experience, Inks Nation has been labelled scam by different organisations, individuals and some investors Meanwhile the Security and Exchange Commission (SEC) has warned investors away from dealing with iBSmartify Nigeria cryptocurrency offerings in an effort to clamp down on crypto-related scams and unregulated products.

According to SEC, the organization itself, as well as the products on offer are not registered or regulated by the commission and are therefore deemed illegal.

“The general public is hereby warned that any person dealing with the said entity and others in the same business in any manner whatsoever, does so at his/her own risk,” SEC said in a public notice.

Here are some of the feedbacks i was able to fetch from some members of Inksnation:

Recently, Inksnation’s admins asked its users for a donation of at least N100 each. But it seems people did not concur as they do not know why they should donate. The big question asked was, why should one (especially those who newly registered and have had no benefit in anyway) donate to the owners of pinkoin cryptocurrency, why can’t the owners just make an exchange with just one of their pinkoin which according to their claims, worth $30,000+ and settle the reason why they needed people to donate to them. However, they devised a means to forcefully get that money from its users (this compulsory donation means “pinkoin worth nothing” and few users will be paid the donated money before the site finally come up with a legal crash report and close the business after puting people’s hard earned money into their pockets).

Right now, all users will have to forcefully provide their BVN (Bank Verification Number – when insknation is not a legalized financial institution to request for this info), ATM Card details (including their secret transaction 4 digits ATM code) and still pay the sum of N202.80 in order to access their account. They name this fraudulent act “a verification process”. Though there are various means of Identification of users through National ID, Drivers license, etc. these guys has strategized to engage its users in a huge risk of providing their delicate bank details instead.

If they were not fraudsters, they would have asked for users’ National ID numbers, but they instead risked its users by requesting for their bank details, ATM card details and a never refundable N202.80 (even though they promised that there will be a refund – there is actually no refund with a correct BVN). They asked for this delicate user financial details despite they themselves being vulnerable to hackers with their faulty coded website (risking the financial privacy of all its users to potential hackers/scammers).

Back to the fraud thread – Imagine a million people paying N200 each, that’s about N200million (fraud). In addition, there is a downside to this. Earlier on, they encouraged users to register their children, parents, grand parents, relatives, etc.. But this their BVN verification process just mean that children and advanced or illiterates who do not have bank accounts or ATM cards (but may have National IDs or Voters Card) would be flushed out, they are those who wanted to benefit from their system and now would loose their registration fees and whatever promises they hoped for (fraud).

Finally, there is no wallet or exchanger on the planet that recognizes pinkoin as a cryptocurrency in order to exchange it to any currency (how come?).

I earlier recommended this platform to people, but i was wrong.

Please, people, run! Inksnation is scam. Presently, the founder has been declared wanted by the EFCC and he took to his heel (ran away with your money). Nevertheless, if there is any positive changes to the system, I will also write to the world. Stay tuned!

seems legit. But we have to wait and see if it gets any value. There are many cryptocurrencies (about 7500)
Most of these cryptocurrencies are attached to projects that were abandoned, bust, or ended up being exit scams. Not all of these crypto projects will last forever. Some are created as a joke or a test, and they soon fade away into oblivion.

But we might hope that the life of Pi is long and worth waiting for while we mine.
To claim your Pi, follow this link and use my username (allonso) as your invitation code.

I have been hearing alot about InksNation and Pinkcoin, so i decided to register to understand how it works.
Here is my Honest Review from a technical viewpoint as a web developer and a User.

The UI/UX of the Inksnation web platform doesn’t stand Out for me, it can be improved…
As a User of Inksnation…They Promise 120,000 Naira to all their User every Month through their Universal salary scheme for members, and also promise that members would be able to use their PinkCard to make withdrawals and purchases with their merchants… So far, The 120,000 Naira salary isn’t visible, but i see a trinkle of people making purchases with their PinkCard.

I would update my review when i start seeing good things happen at Insnation…Right now i would advise you hold on abit.

Inksnation offers the Pinkoin cryptocurrency and claims the InksLedger blockchain can “end poverty in any country in less than 9 months incentivizing goodness, promoting love, unity, oneness, peace and equitable distribution of wealth However SEC warns investors against InksNation as quotes “The general public is hereby warned that any person dealing with the said entity and others in the same business in any manner whatsoever, does so at his/her own risk,” SEC said in a public notice”

Nevertheless, Omotade-Sparks, who also identifies himself as “Universal Daddy Inks (UDI)”, still assures followers that the warning by the SEC is just “a disclaimer.” He says its “the same way they said about bitcoin that whoever trades with bitcoin does so at his own risk. It shall surely end in praise.” Omotade-Sparks even sarcastically thanks SIBAN for “finally doing something that’s meaningful for once.”

There’s no business that has no risk, but while engaging we always encourage investors to be careful.

Inksnation seems to have a nice innovation with fishy sidelines and practises making it vulnerable for investors especially regarding the Disclaimer from SEC.

Hence, you have to be careful while dealing with this platform.